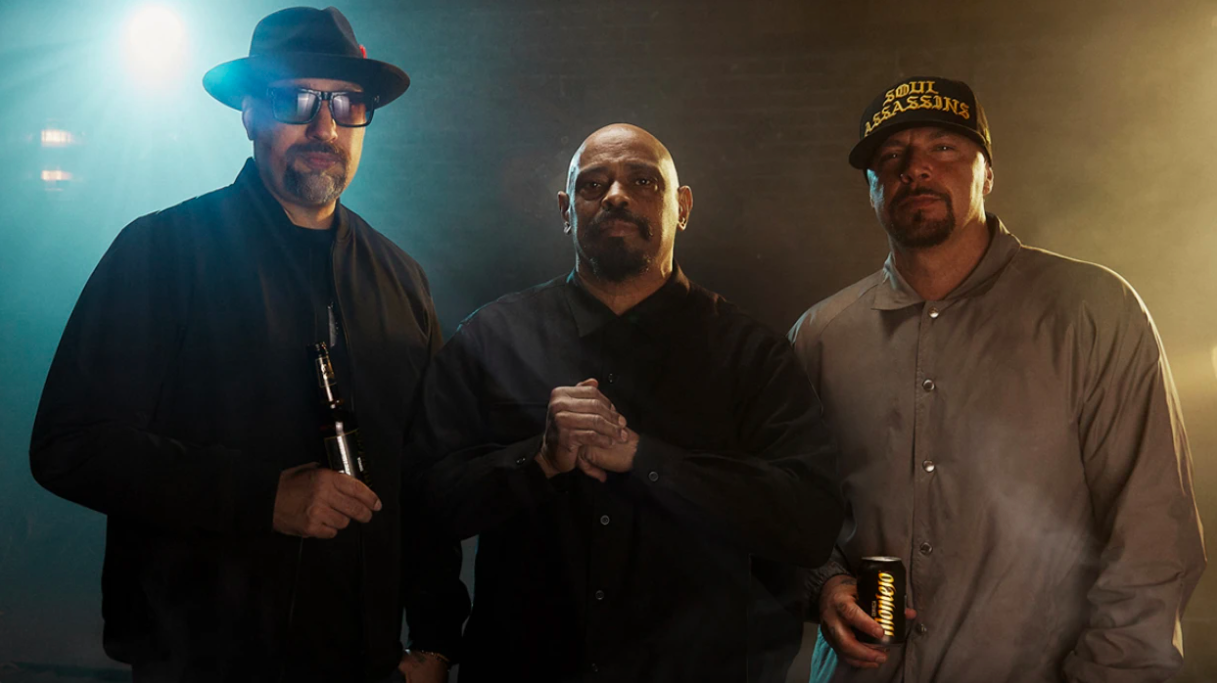 In partnership with Cerveza Montejo, you’ll have to see the no-holds-barred, anything-goes convos to believe them.

When Cypress Hill burst onto the music scene from the West Coast in the early 90s, no one had ever seen or heard anything like them before. Here was a trio creating something wholly new—rap mixed with rock through a Latin lens—made all the more distinct by B Real’s nasal delivery, Sen Dog’s guttural bark, and the hard-driving beats of DJ Muggs. Authentic and innovative, it was seismic, something that immediately shifted the aural landscape.

“Our intention from the beginning,” says B Real, on the phone from Los Angeles, ”was to not be like everyone else. We wanted to think outside the box.

“I think doing something like this is also out of the box,” he adds.

That something he’s referring to is a video interview series, called After Hours, in partnership with Mexico-born, California-brewed Cerveza Montejo. In it the members of Cypress Hill, now seasoned vets of the music game some 30 years in, will interview other artists about the industry and their art: Swae Lee of Rae Sremmurd, Meyhem Lauren, Estevan Oriol, Chika. The series is unscripted. Everything is on the table. Including Cerveza Montejo.

“It’s pretty much a conversation with other artists about breakthrough moments,” says B Real of the series that will have no crowds, and the interruptions or distractions that may come with them. “What inspired them and us to be an artist, and what it’s been like. We thought it would be a good fit to pop a couple [Montejos] and have a conversation amongst ourselves and with other artists. It’s a bird’s eye view of a backstage scenario at one of our shows or any artist’s show.”

“I think everyone’s going to get a real kick out of it when it comes out,” adds Sen Dog.

It’s hard to think of better hosts for the six-part series that will probe the aforementioned artists about their successes and failures in the industry and everything in between. Cypress Hill are multi platinum, Grammy nominated artists whose track record has earned them much due respect. They started as local legends—an “underground movement,” as Sen Dog calls it—whose work rocketed onto the mainstream. As such, they’ve seen the business from every angle. The success they had early on, while substantial, paled in comparison to the explosion in popularity they experienced when albums like Black Sunday and Temples of Boom broke Billboard records and made them festival headliners. They learned along the way how best to navigate each stage as music listeners, Sen says, “got to know what Cypress really was, and that was more than a good time band…a band with a method.”

Part of that method was, from the jump, proudly upholding their Latin heritage, another reason B Real says, “doing a series with Montejo [is] such a good fit.” The Mexican American beer was born in Mexico but is brewed in California. It’s not imported, and the brand has a history of supporting Latin creators, as evidenced not only by their After Hours partnership with Cypress Hill but also their Culture Is Power video series from earlier this year, one of which featured lowrider phenom Estevan Oriol, one of the guests on After Hours. “It was something that just came natural to us,” B Real says of putting their heritage front and center. “We didn’t want to necessarily exploit who we were, we just wanted to give them an organic feel of who we are and where we come from. We would sprinkle it throughout all our albums. We are very proud of what we are and where we come from.”

Like their music (and, come to think of it, Montejo), the interviews will be bold, unapologetic, and uncompromising. Crack open a Cerveza Montejo and tune in. The first episode of After Hours with Cypress Hill and Swae Lee drops May 18 on Montejo’s Instagram and YouTube. “We just want to give thanks to Montejo beer for collaborating with us for this whole After Hours thing,” says Sen Dog.