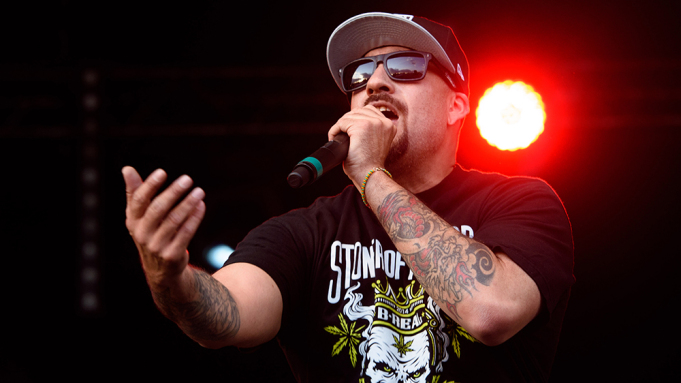 B-Real (Louis Mario Freese), a founder of the pioneering Los Angeles hip-hop outfit Cypress Hill and a member of the supergroup Prophets of Rage (with Public Enemy’s Chuck D and Rage Against the Machine’s Tom Morello), has been a prominent cannabis activist and entrepreneur for some time. But every April 20th, he takes stock of how far marijuana reform has come.

“The cool thing is it’s become a holiday for stoners, a day to celebrate cannabis and the culture,” he says of 4/20. “Also, the dedicated advocates and activists who have helped us get to this era of legalization.”

B will be particularly busy todau, announcing the release of a double-A-sided single via his label eOne that includes “Mother Mary” featuring DJ Paul and “Triple OG,” both produced by Grammy winner Scott Storch and from the Real’s upcoming solo album.

In addition, a limited edition curated pre-roll, a Pineapple OZK strain developed with Long Beach brand Wonderbrett, will be available for purchase at his Dr. Greenthumb’s dispensaries, with a free download of “Mother Mary.” He’s also collaborated with tattoo artist Mister Cartoon for a collection of NFTs based on the artwork for “Triple OG.” The drop begins, naturally, at 4:20pm on 4/20, featuring a live auction during Cypress Hill’s livestream performance from the Roxy.

Cypress Hill, the rap band B-Real formed with Sen Dog (Senen Reyes) and transplanted New York City native DJ Muggs (Lawrence Muggerud) in 1988, naming it after a street in their Los Angeles hood of South Gate, released its self-titled debut in 1991 on the Columbia-distributed Ruffhouse label (which would include acts like The Fugees, DMX, Kris Kross, Lauryn Hill and Wyclef Jean). The seminal album made the group’s love of cannabis explicit with songs like “Light Another,” “Stoned is the Way of the Walk” and “Something for the Blunted,” then on their second album, 1993’s “Black Sunday,” introducing classic stoner anthems “I Wanna Get High,” “Hits from the Bong,” the spoken word track “Legalize It,” and, most notably, “Insane in the Brain.”

B-Real has become a leading cannabis entrepreneur (see Top Potrepreneurs list), owning six Dr. Greenthumb dispensaries (named after the Cypress Hill song) in California (including one apiece in Sylmar and downtown L.A., with a seventh opening in La Mesa in June). Freese also sports a line of Insane-branded cannabis products, including several vape pens in collaboration with Grenco Science’s G-Pen, Insane OG Pilsner with the Atlanta-based SweetWater Brewing company, a lager which smells like weed, part of their 420 Strain Series. The rapper also hosts a podcast, a live streaming site (Breal.TV) and an infused cooking show on Vice, “Bong Appetit,” as well as producing Phuncky Feel Tips, a glass holder for joints, and the Insane Brand Clothing fashion line.

“We always considered ourselves the champions of cannabis culture in terms of hip-hop and mainstream music,” says B-Real of his roots in weed. “We reference it in the music whenever we get a chance.”

Even B-Real is amazed at the current charge for legalization, which started in states like Colorado and Washington, moving to California and most recently, New York.

“It’s amazing that the tide has changed from when it was taboo and known as the gateway drug,” says B. “People are more educated now, willing to learn more by truing it out.”

Building his cannabis brand and seeing the growth of the business has been a rewarding experience for B-Real, and not just financially.

“It’s a beautiful thing when you create something and people respond to it, especially in the cannabis industry” he says. “Many of us had hoped for the opportunity to create a business within this business. Now, not only do you have flower products, but concentrates that are byproducts. The industry is constantly evolving and we’re all learning new ways of operating. It still needs some fixes, but we’re on the path of making it better for all those that follow us.”

B-Real calls his product line “not just a brand, but a legacy and culture,” adding, “We have a lot of love for what we do, in both music and cannabis. This is a passion for us. It’s all about the quality and the love we put into each of them.”

Among the factors holding back the legitimate cannabis business, for B-Real and others, are onerous state taxes. “No other industry is taxed as high as cannabis, at least here in California,” he says. “That shit is just unfair and ridiculous. The cannabis industry basically saved this state. The government has made a lot of money from us. Those folks need to take that into consideration. It’s no wonder cannabis was deemed an essential service during the pandemic.”

The banking issue is another thorn in the side of cannabis entrepreneurs, according to B-Real.

“The banks are afraid to take our money because the federal government might revoke their license to operate. It leaves us in a predicament, because where do we put our money? Until it’s federally legal, we’re going to face this problem.”

As for how the music and his cannabis business interact, B-Real is blunt. He insists it’s a compliment to be called the Grateful Dead of hip-hop, but he would prefer comparisons to “Led Zeppelin or Black Sabbath.”

“It wasn’t something we were looking to be, compared to someone else,” says B-Real. “It was just something that happened, and we embraced it. We were able to have an impact beyond just putting out music to attract new fans. It’s a movement. There are times we haven’t released new songs for three or four years and still had festival shows sell out. We appreciate people seeing us in that light.”