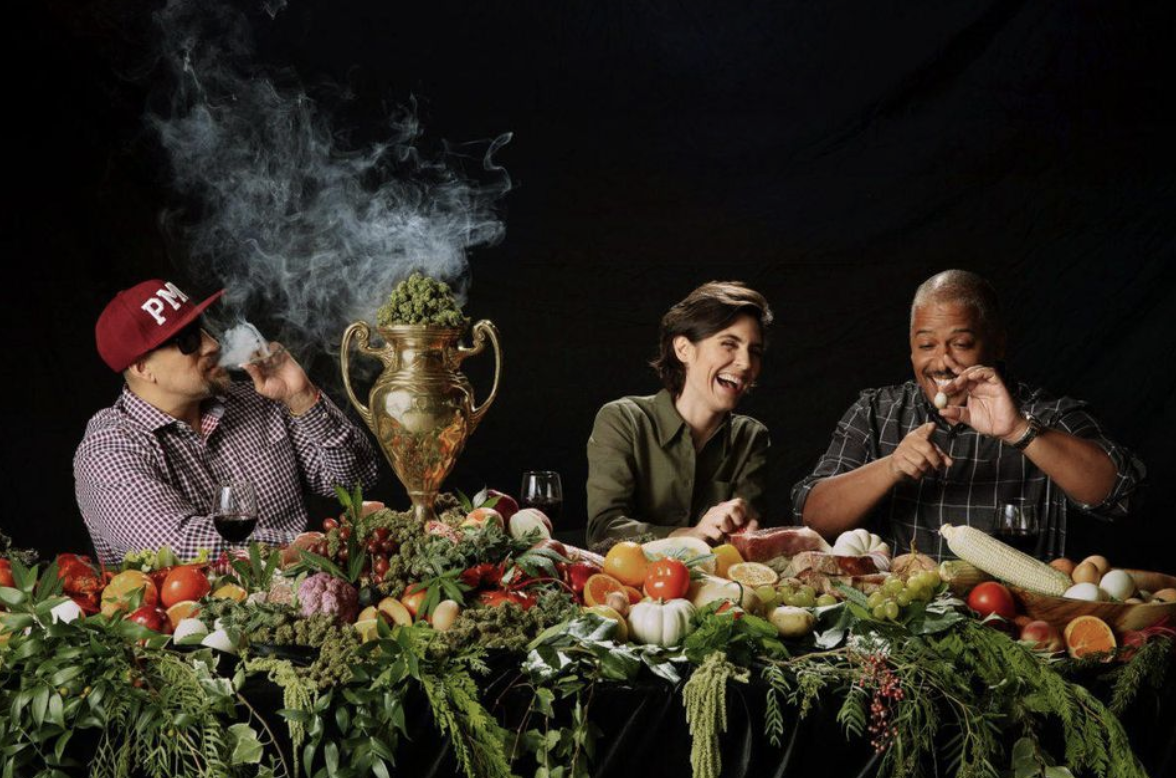 Via Forbes:  As the mainstreaming of cannabis continues, VICELAND’s cannabis-themed cooking show “Bong Appétit,” the most prominent (or maybe the only) marijuana cooking show on national and international television, is upping its bets by incorporating B-Real of Cypress Hill as its season three host and judge, while also rebooting the product as a cook-off – or cooking competition.

The famed rapper, actor, and cannabis entrepreneur will join Vanessa Lavorato, founder of Marigold Sweets, and the very-well-known chef and restaurateur Miguel Trinidad, as they embark in a quest to find the ultimate cannabis chefs in North America.

Debuting on April 2nd, the series will follow contestants as they compete in a series of pot-infused cooking challenges of diverse natures. Each episode will feature a different theme and three unique cooks seeking to be crowned the week’s winner. A little spoiler: even though most of the contestants have little to no experience cooking with weed, the results are impressive.

In addition to the cooks and judges, “Bong Appétit: Cook Off” will feature a fun roster of special guests, including Wiz Khalifa, Lykke Li, George Clinton of Parliament-Funkadelic, and rappers DRAM, Jarobi White, and N.O.R.E, as well as comedians Cheech & Chong and Doug Benson, The Sopranos actor Joe Gannascoli, and Top Chef winner Michael Voltaggio.

Interested in learning more about this awesome show that’s helping bring cannabis to the front and center of global culture, while proving pot can be as sophisticated as consumers want it to be, I sat down to watch the first couple episodes ahead of their release, and followed up with B-Real and Vanessa Lavorato, to further discuss the topic.

The Intersection Of Entertainment And Education

“But this show is also educational in several ways. One aspect of it is competitors have to put meals together. So, for people trying to learn how to cook to any degree, this is an educational show,” B-Real told me. “The other big educational aspect of ‘Bong Appétit:Cook Off,’ and the most important for us, is it teaches people how to infuse their meals properly, with the right dosage. So, while people are being entertained by the competitive aspect of the show, they are also learning what they could pair cannabis infusion with, and the diverse ways they can ingest cannabis, like having it infused in a meal.”

It’s important for viewers to understand there are other ways to consume cannabis beyond smoking joints, hitting a bong or a pipe, or even vaping, B-Real repeated. Infused meals are a good way for many people to consume cannabis because they allow them to better control the dosing in their intake, “ultimately helping them realize the possibilities that cannabis offers – and I think that’s great,” he added.

Vanessa seemed to agree with this point.

Beyond entertainment, this show seeks to highlight the medical properties of cannabis and demonstrate the countless ways to consume it without smoking, or even feel like one is taking medication, she confirmed.

You might think this is not as important a topic but, for some people undergoing serious ailments, medicating without feeling like they are can have a big psychological effect: imagine if you could eat delicious food and feel better afterwards, instead of taking a handful of pills that remind you how sick you are.

Cannabis-infused meals provide patients with an enjoyable option to medicate, B-Real concurred. “Some people can’t take smoking, or the thought of it even,” he said, acknowledging that, while many conceive cannabis as a plant rather than as a drug, many others might still connect smoking weed with doing drugs.

Throughout our conversation, B-Real went into proper dosing over and over again. For him, it’s important people don’t overdose (meaning they don’t take too much cannabis) when medicating. And that is not always easy, especially with some of the old-school intake methods.

“With the chefs on the show, we wanted to show people the proper dosages that should go in your everyday meals, and the usage of CBD, and not just THC… There’s a lot of benefits there in terms of the usage of both CBD and THC, both together and separated… So the show provides people with a lot of insight into medicating with cannabis, but it makes it fun as well… We don’t want to force information on people; we want them to have fun while learning. ”

Vanessa, of course, also brought up the importance of proper dosing a myriad of times throughout our long conversation. “We wanted these meals to be something people can get excited about, something they want to eat. It’s not something that they have to just scarf down, then drink a big glass of water and hope it’s not going to get them too high,” she said, emphasizing both the dosing aspect of it, as well as the flavor and presentation side of a good cannabis-infused meal.

Breaking The Stigma Can Take Many Forms

When not touching on the medical benefits of cannabis, “Bong Appétit:Cook Off” still evidences how marijuana, just like food, can help people bond and create meaningful relationships, Lavorato told me.

While this is a cannabis-themed show, the emphasis is still put on the food and cooks’ “ingenuity in using cannabis in their cuisine,” she explained.

One of the things that stuck with me was Lavorato’s point about how there are as many ways to end the stigma around cannabis, as there are ways to consume it.

To illustrate, she brought up musician Lykke Li, one of the show’s special guests. “She’s a responsible mom, but she’s still sitting there and smoking with us… It’s a big deal to come out on camera consuming cannabis. It shouldn’t be, but it is,” she said. “Not everybody is equally open-minded. So having big celebrities come on the show and consume cannabis helps get the mainstream closer.

“ Hopefully the show, like many of its guests and participants, helps change the conversation about cannabis, so that grandmas in the Midwest could see cannabis differently .”

By means of conclusion, B-Real voiced: “This show can reach different circles of people who aren’t normally in the ‘stoner culture’ but re willing to try these types of infused meals. It can be a setting for anyone… While there are very different forms of cannabis users in the cannabis community, this show also allows for people outside the cannabis community to understand that this [consuming cannabis-infused meals] is a great option if you’re wanting to try cannabis casually or if you have a medical ailment you want to treat without smoking.”

Tune into ‘Bong Appétit: Cook Off” every Tuesday at 9:00 PM ET/PT on Viceland.